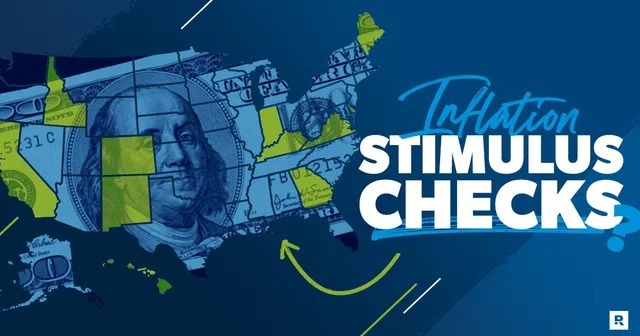 Inflation Stimulus Checks Are Coming to These States

Wait a minute—are people really talking about stimulus money again? That’s right, just when you thought they were all a long-lost thing of the past, here come inflation stimulus checks. The whole point of these is to, you guessed it, help combat inflation—not to stimulate the economy as those other checks did. After all, that might have a little something to do with why we have this killer inflation in the first place. But that’s a topic for another day . . .

So, what’s the deal with inflation stimulus checks, and is your state on the list for dishing one out? Let’s see what the fuss is all about.

What Are Inflation Stimulus Checks?

Inflation stimulus checks are relief funds set aside to help people cope with the high costs of goods and gas (thanks to inflation). With inflation reaching its highest rates in 40 years and the average gas prices breaking records daily, it’s no surprise states are trying to do something to help battle the insane prices these days.

Budget every dollar, every month. Get started with EveryDollar!

Since 2020, we’ve all learned a thing or two about stimulus checks, right? But these inflation relief checks are a little different since they’re coming from the state level—not the federal government. On top of that, their whole purpose isn’t really to stimulate the economy here but instead to help people cover the high price of gas and groceries.

Which States Are Giving Out Inflation Stimulus Checks?

Remember how some states were dishing out their own state stimulus checks after the pandemic? Well, these states are upping their game and giving out their own inflation relief checks now. See if your state made the list:

Leave it to California to have an inflation relief check plan that’s massive—just like the state. After a pitch by Governor Gavin Newsom earlier in the year to fight inflation and gas prices, the state landed on a $17 billion dollar inflation relief package for California residents. Inflation stimulus checks up to $1,050 will go out to 23 million Californians, along with suspending sales tax on diesel fuel and helping people pay their rent and utilities.1

Colorado follows something called the Taxpayer’s Bill of Rights (TABOR), which requires the state to refund taxpayers when Colorado goes over its spending limit. Because of that, they’ll be cutting inflation relief checks. All Colorado residents who filed a 2021 tax return are eligible for a $400 payment this summer.2

Taxpayers in Delaware can expect to see some relief rebates too. In May, Delaware started giving out $300 inflation stimulus checks to taxpayers in the First State.3

If you live in Georgia, then tax rebates are probably on your mind. Taxpayers in the Peach State can get one-time tax credits (if they filed taxes in 2020 or 2021). After your taxes are paid, the state of Georgia will automatically credit you up to $500.4

In Hawaii, the governor used his State of the State address to bring up the idea of sending out $100 to taxpayers (and $100 for each dependent).5 So far, though, those inflation relief checks haven’t gone out, and the proposed bill is still moving through the Hawaiian government.

In the Gem State, taxpayers are getting tax rebates to buffer the impact of inflation too. Idaho is paying out $75 for each taxpayer and dependent or 12% of their 2020 taxes—whichever amount is bigger.6

Inflation stimulus checks are coming to the Hoosier State. Taxpayers will get a $125 inflation relief rebate, and could get another $225 on top of that (if the Governor’s latest proposal gets approved).7

Governor Laura Kelly of Kansas proposed a one-time tax rebate of $250 ($500 for married couples filing jointly). But all the details of this inflation relief check haven’t been nailed down yet, so stay tuned.8

The Bluegrass State is in the process of moving through a $1 billion rebate plan for Kentucky taxpayers. Nothing is finalized just yet, but if it passes, eligible Kentucky residents could get a one-time inflation relief check payment of up to $500 per individual and up to $1,000 per household.9

In the North, Maine residents are getting checks from the Pine Tree State. A grand total of 858,000 taxpayers are getting inflation relief checks of a whopping $850 each.10 That’s almost the highest amount on this list!

In the Land of Enchantment, the governor signed a bill that put a couple of different inflation relief checks into people’s hands. They were a refundable child tax credit ($175 per child) and a one-time refundable income tax rebate ($250 to $500 for qualified taxpayers).11 On top of that, a two-part rebate went out to taxpayers in May and will finish up in August.12 Add it all up and families in New Mexico could see a payout of $1,500.

On the table in Virginia is a bill that could help with inflation relief through direct payments and getting rid of the grocery tax in the state (2.5%). If passed, the bill would give out $250 inflation stimulus checks per taxpayer, plus bring the tax rate on grocery and hygiene products down to zero.13

How Are States Paying for Inflation Stimulus Checks?

It’s time for the question on everyone’s mine—who’s paying for all of this? Most states are funding these inflation rebate checks through their state budget surpluses. Cool, cool. But what the heck does that mean? Well, it’s like when you do your monthly budget and have some money left over. Basically, states budget out how they plan to spend cash throughout the year. When they have money left over, that’s the state’s budget surplus. That “extra money” is how these states are paying for those inflation relief checks.

Most states haven’t said exactly how much of their surplus they’re giving back to taxpayers, but some have been pretty open about it. In places like Maine, the state is putting over half of the budget surplus back in the pockets of the taxpayers.14

Will the Federal Government Give Out Inflation Stimulus Checks?

That said, a few senators banded together to try to get something rolling called the Gas Rebate Act of 2022—legislation that would give a $100 monthly rebate (and $100 for each dependent) to help Americans deal with these nutty gas prices we’re seeing.15 They say the payments would keep going through 2022 in any month when the national average gas price is $4 or more. Now, nothing’s official yet, so don’t hold your breath that this will actually happen.

Whether You’re Getting an Inflation Stimulus Check or Not, You Need a Budget

Here’s a crazy idea—instead of hoping for Uncle Sam to swoop in and save the day with an inflation stimulus check, give yourself a raise to tackle inflation. Okay, it might not be as easy as snapping your fingers, but it’s as easy as making a budget.

Most people feel like they got a raise after making their very first budget! That’s because doing a monthly budget actually puts you in control of your money. And when you tell your money where to go instead of wondering where it went, you feel like you just got a raise. And with this record-breaking inflation, we’re having, that will really come in handy.

The easiest way to make a budget? Our free budgeting app, EveryDollar. It’s an awesome stress-free way to make your first budget. And if you live in a state that’s cutting an inflation stimulus check, EveryDollar will have your back when it comes to putting that money to work for you too. And let’s be real—that’s a lot more than the government can say.

Ramsey Solutions has been committed to helping people regain control of their money, build wealth, grow their leadership skills, and enhance their lives through personal development since 1992. Millions of people have used our financial advice through 22 books (including 12 national bestsellers) published by Ramsey Press, as well as two syndicated radio shows and 10 podcasts, which have over 17 million weekly listeners. Learn More.