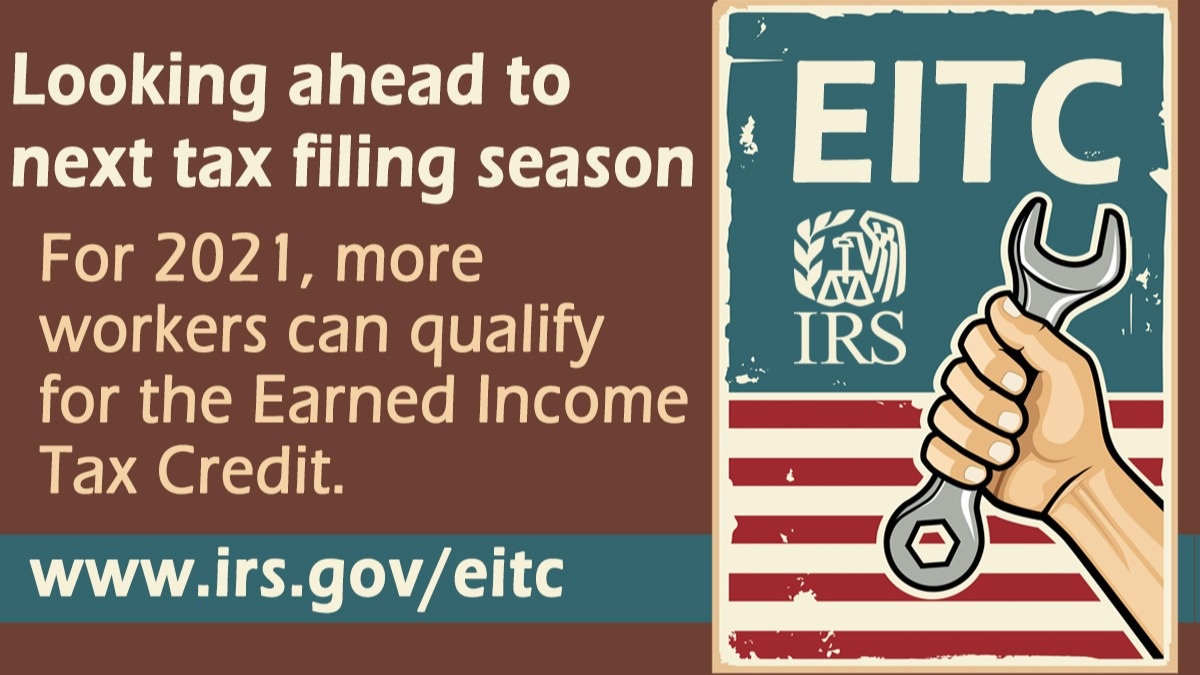 Important Enhancements to The Earned Income Tax Credit for 2021

The earned income tax credit (EITC) is regarded as one of the government’s largest antipoverty programs and helps millions of American families every year. You are urged to check to see if you qualify for this very beneficial refundable credit. Significant enhancements have been added (some only for 2021), and even if you have not qualified in the past, you may qualify this year.If you are not normally required to file a tax return because your income is below the filing threshold, you could qualify for this credit. You may also qualify for the child tax and the recovery rebate credits, plus get a refund of any income tax withholding you had during 2021, so don’t assume there is no benefit from filing a tax return.The IRS estimates that one in five individuals eligible for EITC fail to claim it simply because they don’t understand the criteria. Plus, many individuals who never qualified for the EITC previously may be eligible in 2021 because their income will be lower because of the COVID pandemic. Nationwide last year, almost 25 million eligible workers and families received over $60 billion in EITC with an average EITC of $2,411.To qualify for the EITC you must have earned income. Earned income is generally income from working, such as wages and net self-employment income, but also includes tips, union strike benefits, nontaxable military combat pay and nontaxable parsonage allowances for clergy. Wages for this purpose includes wages before reductions due to salary deferrals such as 401(k)s, cafeteria plans, and excludable dependent care benefits.There are several changes to EITC for 2021 that will allow significantly more individuals to qualify for the credit. Generally, the age threshold to claim the EITC is 19, with certain exceptions, and with no upper cap on age. In the past, the EITC was only available to people ages 25 to 64. In addition, individuals may have investment income of $10,000 (up from $3,650 in 2020) and still qualify for EITC. Childless workers and couples can qualify for the EITC if their earned income is below $21,430 ($27,380 for joint filers), and the maximum credit for a taxpayer with no qualifying children is $1,502, up from $538 in 2020.As mentioned previously, the EITC is based on the amount of your earned income and whether there are qualifying children in your household. The credit increases as the taxpayer’s earned income or adjusted gross income (AGI) increases, until it reaches a plateau, where it remains constant at the maximum credit amount until it reaches the AGI phase-out threshold. Once the threshold amount is exceeded, the credit is reduced by a set percentage, and no credit is allowed once the income exceeds the top of the phase-out range. The following table illustrates the maximum credit and phase-out ranges based on filing status and number of children for 2021.

Qualifying children – A qualifying child must be under the age of 19 or be a full-time student under age 24 at the end of the tax year. This age test does not apply to a child who is permanently and totally disabled. In addition, they must meet relationship and residency tests.2019 AGI – There is a special rule for 2021 only: Where a taxpayer’s 2021 earned income is less than their 2019 earned income, the taxpayer can elect to use the 2019 earned income amount to compute the 2021 EITC. This was put into effect for taxpayers whose income has decreased because of COVID but applies to anyone who chooses to use the 2019 AGI. However, one must be cautious when making the choice to ensure the AGI that produces the best result is used.Selecting the 2019 AGI to compute the EITC will have no effect on the 2021 income tax since the 2021 AGI will be used for that computation. Taxpayers should also note that any Economic Impact Payments or Child Tax Credit payments received are not taxable or counted as income for purposes of claiming the EITC. Eligible individuals who did not receive the full amount of their Economic Impact Payment may claim the Recovery Rebate Credit on their 2021 tax return.Separated Spouses - Married but separated spouses can choose to be treated as not married for EITC purposes. To qualify, the spouse claiming the credit cannot file jointly with the other spouse, must have a qualifying child living with them for more than half the year and either:

Child Does Not Have an SSN - Single people and couples with children who do not have Social Security numbers cannot claim the EITC available for taxpayers with children. But they can claim the smaller EITC available to childless workers. In the past, these filers didn't qualify for any credit.Refunds Delayed – Because of substantial fraud related to refundable credits, Congress revised the tax law a few years ago so that the IRS cannot issue refunds before mid-February for tax returns that claim the EITC or the Additional Child Tax Credit (ACTC). The IRS must hold the entire refund, giving the agency more time to detect and prevent errors and fraud.Active Military - Members of the military can elect to include their nontaxable combat pay in their earned income for the earned income credit. If that election is made, the military member must include all nontaxable combat pay received as earned income. If spouses filing a joint return both received nontaxable combat pay, then each one can make a separate election. Disabled Individuals - Disabled individuals frequently overlook the opportunity to claim EITC. Even though they may not be working and earning income, certain disability income is treated as earned income for purposes of the EITC and includes the following amounts:

If you qualify for but failed to claim the credit on your return for 2018, 2019 and/or 2020, you can still claim it for those years by filing an amended return or an original return if you have not previously filed.If you have questions about your qualifications for this credit or need help amending or filing a prior year’s return to claim the credit, please give this office a call.